Managing During Hypergrowth and Change - Chris Slowe, CTO of Reddit, at Elevate 2019

At Plato, we were already lucky to have Chris Slowe, Reddit’s CTO, participate in a live video AMA with us a few months ago. We’re now honored he did the first keynote of our recurring event: Plato Elevate.

Reddit’s CTO, Chris Slowe, talked about his time from the early days at the company to today, and his strategy to lead during periods of growth and change.

Chris graduated from Harvard with a PhD in Experimental Physics, to become a founding engineer of Reddit in 2005. After spending a few years here, contributing to the platform, its infrastructure, its code, and experimenting with his first mistakes, he joined Hipmunk as a Chief Scientist in 2010. Among other things there, he helped the team grow from 4 to 50 and eventually learned management on the spot.

He came back to Reddit in 2016 as the CTO, partly to undo some of his past mistakes, but mostly to enable the company to become the giant we know.

Reddit, a network of communities where individuals can find experiences built around their interests, hobbies and passions, has indeed shown consistent growth from its beginnings.

It is now the 4th most popular website in the United States, and ranks 6th worldwide according to Alexa. Some pretty solid figures for the biggest little site no one has ever heard of :

Reddit was founded in 2005 and had a magical Product-Market Fit, before people called it that. Traffic was doubling consistently every 3 months for the first several years. Chris is still amazed at how rare and beautiful it is! Rare, because there are only a handful of companies that can achieve such growth, and beautiful, because the analyst in him could literally see a slope in traffic charts week over week. 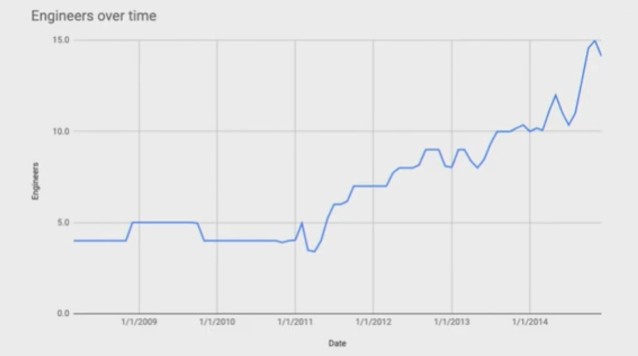 Beautiful, and a bit scary of course, as it meant an amazingly low number of people were responsible for the company’s growth, security, infrastructure, code, etc.

It is even more astonishing when you compare the number of engineers to monthly page views: 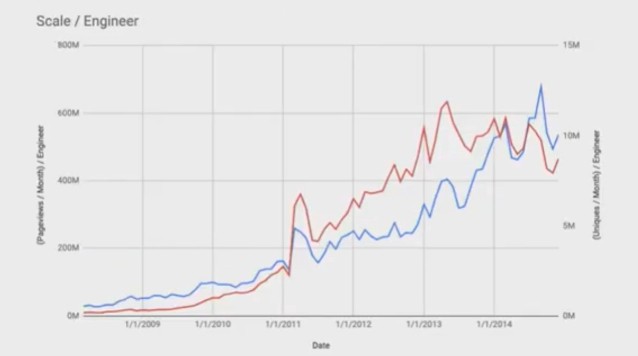 So, what does the organization look like with such constraints? Chris describes the initial way they operated was just…getting stuff done.

Chris really considers this phase as what a lean startup usually looks like. When you’re just about five engineers, you’re constantly fighting fires, putting the site back up and ensuring everything goes smoothly. The team consisted of 10x engineers who mostly knew what to do.

Chris likes to say that the T in CTO stands for Therapy.

According to Chris, 10x engineers are well-suited for startups: they are self-driven, do not need directions, and just get things done when they need to be done. On the other hand, they are hard to manage, or at least, it’s hard to find the right way to manage them.

In such a configuration, there was no need for managers, and no need for PMs...and sometimes, no ability to step back. Though they did really well, Chris acknowledged that they could have done better, especially in terms of design. 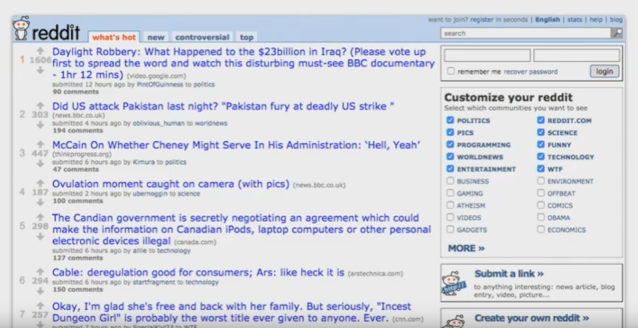 In a land without PMs and designers

Following 2010, Reddit had an interregnum, or as Chris would call it, an interfounderum: a period of transition where all of Reddit’s founders moved on to other projects, only to come back in 2016.

They figured out they needed to start looking like a real company, especially in terms of size and organization.

Such evolution in teams, from a bunch of engineers to product, core, platform, infrastructure, data and security also defined the role of CTO well. Chris warns us that it is not to be mistaken with the role of VP of Engineering.

At Reddit, both CTO and VPE have to be technical first, intrinsically about strategy, but the VPE has a focus on execution and management whereas the CTO has a focus on architecture and the big picture, be it in terms of code or management and culture. Chris likes to say that the T in CTO stands for Therapy.

So, what does the culture look like at Reddit? Here are some lessons learned by Chris about it.

Chris, quoting his colleague Alex Le, stressed on the idea that “a fact is more than a statement repeated 64k times”. It means that processes need to be consistent and straightforward for them to become the way people operate.

Processes are also imperfect, and this is something that doesn’t change as the company scales. They take a long time for setting in, which means it’s important to iterate on them, improve them until you have found the MVP (Minimum Viable Process). It is hard to optimize them because you don’t know your destination, while you do know the constraints.

Each process affects change over time at a company and only when it becomes “the way this is done”, is it a part of the culture.

The importance of values

If you had met Chris in 2008, he would have called BS if you talked to him about a company’s values.

Since then, though, he understands values are more than corporate speak, and admits it’s actually one of the most important things for a company to thrive in business.

In his words, the purpose of management is that managers are connectors, cutting down on the number of hops between people, to make communication and collaboration more efficient. Companies with many employees have to follow some sort of hierarchy, but values are a big helper there. Distilling out values is a way for the company to broadcast and reinforce important ideas, and then make them memes.

In his best-seller Sapiens, Yuval Noah Harari talks about the imagined reality of gods, nations and corporations. He explains that as times went by, people started imagining intersubjectives such as laws, money, gods or even nations. These beliefs are nothing more than ideas that living in the mind of several people and linking the subjective consciousness of many individuals.

Chris believes companies are the same: a company is a legal construct, which is itself an idea. If it exists, it is above all in the minds of its employees, and it needs to be shorn up by other ideas and beliefs.

Values are the glue that helps people stick together and collaborate, and Chris separates them in 3 different categories:

Chris also stressed on the fact that mentorship is one of the most important values at Reddit because it helps create a common culture among employees. When a new hire arrives, she can easily get lost in the crowd and feel like she’s not 100% part of the company. Mentorship enables an insider to help the person integrate within the company smoothly.

Mentoring is a win-win situation as it also helps the mentor improve his communication skills and assimilate concepts in a better way when teaching. Mentoring is essential because the mentor will help her acquire sufficient knowledge to perform well, but also because the interaction between the mentor and its mentee will enable her to understand and share the company culture and values more quickly.

Speaking of which…time is money!

Time is money, and values save time

Time is money is an old adage we all know, but Chris rephrased it in an unusual way: meetings are expensive, and should be treated as such.

While we may be used to rest or finish work during meetings, Chris gently reminded us that meetings aren’t for entertainment. The purpose of a meeting should thus always be clearly stated and reiterated, and it should be killed when it outgrows its utility. As a manager, meetings are here to keep people informed and to improve the communication conduit up and down.

Meetings can be a good opportunity to broadcast and reiterate values on a regular cadence. As Reddit grows year after year, Chris thinks it’s important to hold all-hands meetings to realign people on values.

Even though the cost of these all-hands meetings is high, values are an investment, in a way that it helps pull everyone back together and create an efficient work environment. Values inform the processes and behaviours, and therefore beget culture.

Thanks to Chris Slowe for attending Plato Elevate and sharing with us so many insights in just 15 minutes. If you want to know more about Chris and how he helped Reddit become… Reddit, we suggest you have a look at his wonderful AMA too.