How To Build Collaboration Between Engineering and Product Teams - Rachel Obstler, VP Product at PagerDuty

Rachel Obstler, VP of Product at PagerDuty, has been playing hockey since college. Though she describes herself as a not-so-good player, she learned a lot with her team. In hockey, when you make an effective, flawless pass to a teammate, you call it stick-to-stick, or tape-to-tape if you refer to the tape on the blade of the hockey stick.

Back in the day, she used to play in the third line with two teammates to support offensive players, and this is where the magic happened: the three of them brought more than the sum of their skills, and it felt like they were four. They played more and scored more, which seemed unusual at first, but happens every day in a startup.

Most organizations are agile/scrum, and PagerDuty is no exception. There, teams build and operate code, and sometimes have to be on call.

To reinforce the team spirit, each squad is named, has its charter, the same objectives, and the team members are co-located. UX designers, product people or engineers sit in the same office instead of staying with the rest of their organization.

Jeff Bezos coined the concept of “two-pizza teams” at Amazon: if two pizzas cannot feed a whole team, it means the team is too big. To Rachel, teams shouldn’t be too small either, 5 being a minimum and 6 being ideal.

When you have people who both own and operate software, you don’t want them to go on call more than once every six weeks, and you want the team to roll even if someone has to leave for an emergency, vacations, or another company.

Teams should also be staffed to with all the skills needed to make a project successful, and given autonomy as well. Having that setup has multiple benefits: 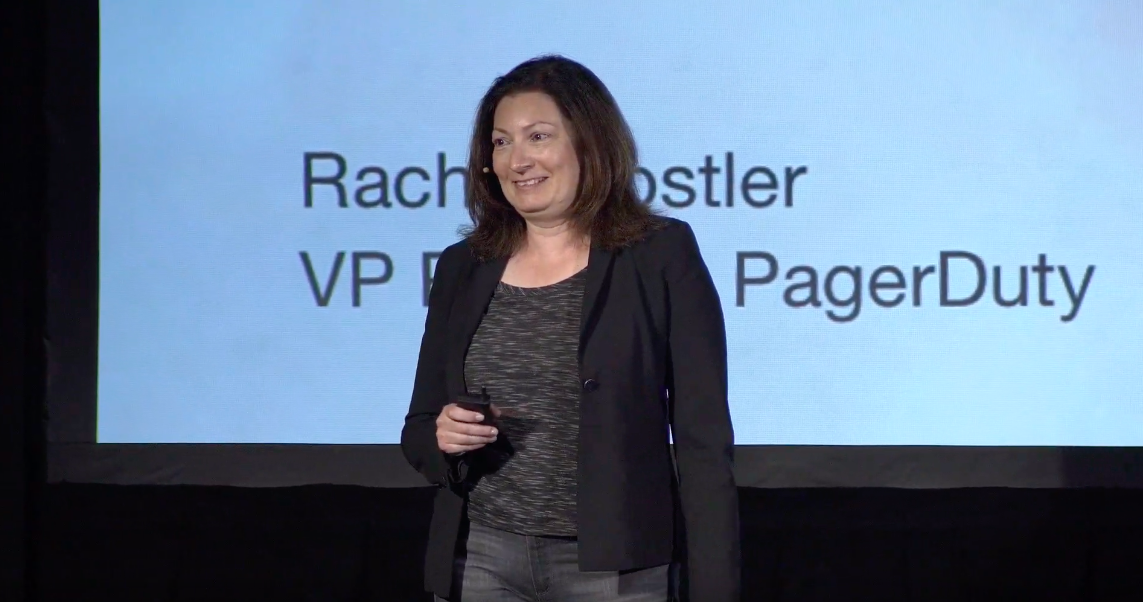 If we zoom out a bit in the org, on a more macro level, engineering and product executives should be aligned too. When the structure of both “departments” is similar, it will help people solve problems in more flexible manners.

A Director of Product Management and a Director of Engineering should thus have the same scope, own the same purview, the same set of products or capabilities across a product. Once they have that resemblance in structure, that commonality, they will be able to work more efficiently.

Rachel shared an anecdote about one dysfunctional team. It was the perfect storm: the product manager was moved to another team, the engineering manager was on vacation and came back only to leave the company, the team was short of engineers. To quote Rachel, someone had to Zamboni — referring to the device that cleans and resurfaces ice rinks — that situation.

Product and Engineering execs had to figure out what to do with people and ended up putting two teams with similar interests together for a short period. They had a new “home” that felt perfect and started being motivated and productive again. Rachel recalls that success as being a fantastic moment: managers talked it out, figured out what to do and executed it perfectly, without looking for help above.

That org alignment enabled Rachel to give autonomy to the teams, which led to creative solutions and brilliant execution.

The benefits of executive alignment

To Rachel, having alignment between engineering and product teams has three major advantages:

To conclude, effective collaboration with engineering and product people helps companies thrive on different levels. Firstly, individual teams and members excel because people support each other and go above and beyond towards a common objective. What’s more, managers of managers can find and execute creative solutions without any friction. Finally, the whole company benefits from that collaboration and sees increased trust, transparency, and market improvements.

The question we liked asking the fantastic managers we welcomed at Plato Elevate is the following: what is some life advice you could share with the audience?

Rachel answered that the single most important thing about any job or role is the people you will work with. Ultimately, this is what has the biggest impact on whether you can excel in your job, feel happy to go there every morning, etc. She believes that it’s more important than the company’s mission or salary. If you work with people you get alignment with, it will ultimately increase your chances of making the company successful.

Thanks a bunch to Rachel Obstler for her insights, and we wish her a lot of cellies on the barn!