HackerRank enables more than 5 million developers to grow and develop their careers through coding practice, interview preparation, and job boards.

Before asking questions to the panel, Oded shared some insights from a survey on career development his team conducted at HackerRank. The sample was made of more than 10k students and provided him with interesting data.

To the question “How did you learn to code?”, 31.9% of students answered “at School”, 27% were self-taught, and 37.7% learned both at school and by themselves. What’s interesting about this data is that about two-thirds of the respondents learned by themselves in some way, with sites like Stack Overflow or YouTube videos. This means that people invest in their knowledge to grow and advance their careers.

Another insight was about what student developers wanted most in a job: 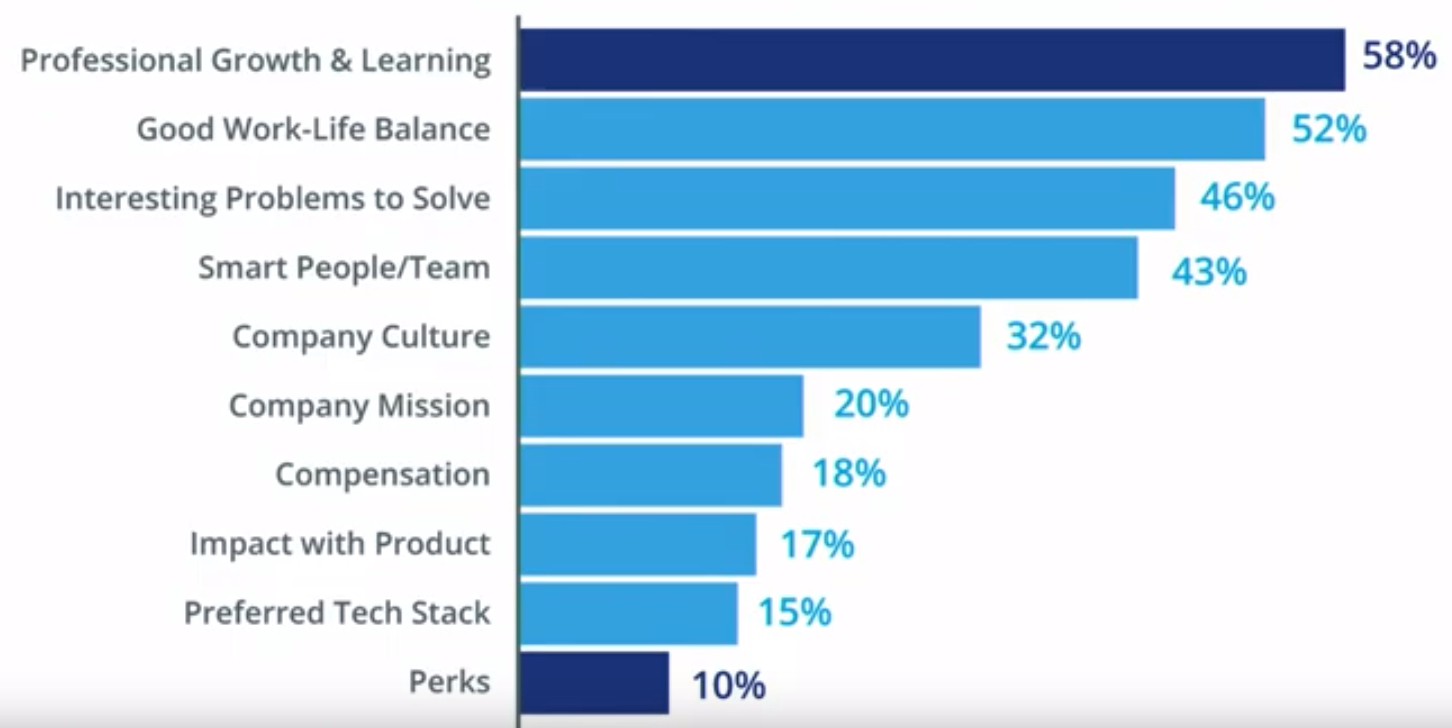 Looking at these results, Oded stressed on the fact growth opportunities are 5x more attractive than perks for student developers. In the US, the answers were similar, except for the fact work-life balance came first (53%). This shows that people’s aspirations in a tech company are different from what managers usually expect: employee growth and career development should be considered seriously!

This led Oded to ask the first question. 20 years ago, there were software developers. Now new skills are ranging from AI, Data, front-end or back-end to algorithms. Tech evolves too. So, what’s the role of a manager when it comes to developing those skills?

Prafulla Arvind believes it’s essential to recognize tech is everchanging and that products need to evolve and adjust accordingly. She thinks teams need to be dynamic, and managers should encourage their direct reports to read and be up-to-date on the current, latest techs. To do so, VMware does a lot of POCs and Prafulla encourages her team to constantly work on them: brainstorm, have open conversations and do things they’re not comfortable with. Also, while she acknowledges Scrum meetings should stick to their purpose, it happens that she has a quick chat with developers about what to read, which blog articles are interesting, etc.

When Oded asked her if she needed to bring some structure to that evolution, or if it was more informal, she answered that it’s more of a habit to inculcate her team. It has to be part of a daily routine. You come in the office knowing what to work on, but you have to know what’s going on around and what to keep an eye on too.

Chris Saint-Amant has another way to look at this at Netflix. What he usually does is giving special, challenging problems to solve. The team would then come back to him telling him about the tech gaps they might have, what they need to solve, etc. For Chris, this might mean having to hire someone with a skill set that will help people grow in a specific domain or bringing in training. Starting from a real-life problem, people thus evolve and grow their skillset.

Sonesh Surana advises people to develop specialized skillsets. He believes that there are eras in tech: about every five years, there’s going to be something very new and exciting, a major driver of business value. He thinks techs should invest in these, spending a couple of years developing specific skills. He warns people to develop that domain expertise, without being trapped and keeping their minds open. That way, developers will see intersections, overlaps, and skills that could be translated to any tech.

Oded then asked the panel about soft skills. Soft skills are sometimes considered as black magic because it’s hard to assess and measure their importance and impact on a company. So, how do you grow and assess the soft skills of the team? What’s the role of a manager in that context?

Chris spends most of his time and energy on soft skills. He recently started to rename them as “core skills”, as they are critical for a company’s success, no matter what is the technology you’re working in. It’s often the area where people need most coaching and development, and it even goes back to the interview process at Netflix, where 50% of their interview process is structured around assessing those skills and not just the technical ability of interviewees. When he thinks back about the amazing people he worked with, he wonders why: is it because of their amazing tech depth, or the way they communicate, collaborate and advocate for ideas? In his experience, it’s almost always the latter. It doesn’t matter if people have mediocre tech skills if they work incredibly well together, vs. 10 amazing engineers that cannot collaborate or communicate.

When the execs have discussions around promotions for specific an engineer, it’s never whether she codes well or not, but whether she has team or soft skills.

The whole panel thus believes soft skills are of critical importance, but it raises the question of who helps these people thrive. Oded Shekel asked: “what’s the role of a manager in employee growth? Who’s responsible, accountable for career development?”

Sonesh from Optimizely shifts his thinking based on the company situation and the individuals involved. He believes that growth is driven by the individual, the engineer. They should own their development and stay committed to it.

Managers act as supporters and shepherd that process. People decide, managers help them stay on track. Not all engineers feel comfortable owning that growth though. They don’t always feel it’s fine to push for it. A manager’s role would be to tell them it’s ok to advocate, and if they forget or don’t get confident, to remind them and ask them for their thoughts.

That supporting role is about having conversations and develop a picture of what one’s career looks like. Support depends on the company’s situation. Any team will go through different phases, from frantic chaos to relative stability. To Sonesh, every situation is an opportunity for employee growth. Chaos is a chance to try something new, while stability is an opportunity to deepen one’s knowledge or master a particular skill.

Through his experience, Sonesh noticed that people tend to fall in roughly 3 different buckets:

Chris also thinks growth is highly personalized and has to be tailored and specific. Engineering Managers have to match things teams need with things people need to thrive. To do so, they need to dig in, spend time with people, ask them. Do they want more influence over tech? More impact over product direction? Go deeper in a specific tech? Grow into management? Increase their compensation? Knowing the specifics people are pursuing helps managers line up opportunities, as long as it is still in line with what the team and the business need.

Prafulla thinks asking people is a good way too. Sometimes, there is no opportunity for a specific employee growth need, and it’s the role of the manager to create it. To do so, they need to stay plugged in to what’s happening and identify paths for growth, even if it’s another unit. Sonesh gave a big +1 to Prafulla’s answer, reminding the audience one of the founding statements of Plato: “People leave managers, not companies”. In such a competitive market, it’s crucial to think about ways to keep employees in a company, even if they don’t stay on your team.

Talking of employee retention, Oded asked the panel how companies can adjust to the specific needs of developers, and how they could for instance tackle the needs of different generations. Prafulla thinks that as awareness grows, it’s important for employees to make a point to know where they are, where they want to be, which aspirations and expectations they have, knowing beforehand why they chose a company. Sonesh thinks younger engineers often come in with an open perspective, and they can bring a lot to a company. They come in with a view that it’s fundamental for companies to invest in diversity and inclusion, for instance. So, he believes new generations help companies grow.

Finally, Oded Shekel asked panelists the recurring question we ask at Plato Elevate: could you share a life-changing piece of advice someone gave you through your career?

Thanks to this amazing panel for their presence and insights!