This article sums up one of the panels we had at Plato Elevate, our recurring conference about Engineering and Product Leadership.

The panel was composed of:

Before greeting his guests, Tyler warned the audience that communication is an abstract topic. It was important to him to sum up the core components of communication: how it is managed, and how it should be managed.

One of the biggest mistakes companies make is driving performance through communication with (only) operational alignment.

Companies usually believe it’s enough to ensure people are operationally aligned. They design their strategy through mission, vision, OKRs, etc. They also assign accountabilities to team members through RASCI (a matrix of roles and responsibilities in a project) and project management software. They also track performance through KPIs, BI tools, etc. And that’s it.

If you stop here, you’ll have the assumption that this is how things are done and how a team should function. But this operational layer is only the tip of the iceberg.

To Tyler, effective communication that drives team performance looks more like this: 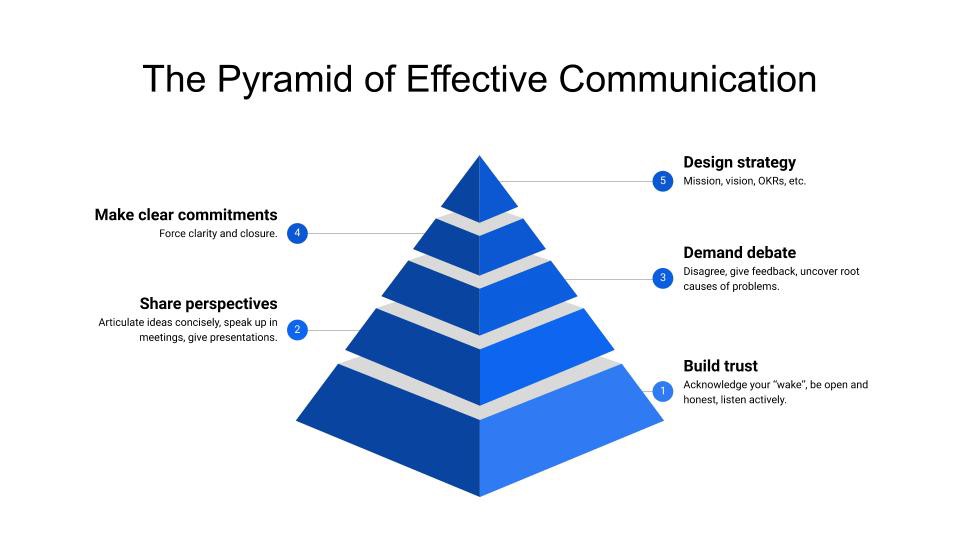 Building trust, sharing perspectives, demanding debate, making clear commitments, and designing strategy are thus key components of team performance, but each part of the process can bring in trouble if done wrong.

The leaders Tyler invited have figured out some ways to overcome these issues, which we summed up below.

Jen You, VP of Technology at WeWork, makes sure principles feel like they were originating from the team. To do so, she makes sure people attend off-sites and get to speak to each other in more intimate environments. In such set-ups, they are more inclined to be honest with each other and develop expectations around how to communicate, something they are accountable for.

Jen also believes in giving folks a forum, a channel to be more revealing and “vulnerable” about who they are, how they operate and communicate. At WeWork, she created user manuals, slightly inspired from baseball cards. These are places where employees can write a brief summary about themselves, how they communicate, common misperceptions about them, things they believe are valuable, what makes them happy in their worlds. Having these interests, blind spots and nuances written on paper helps create better interactions.

There was a lot of uncertainty and a lack of trust so she decided to build it back from scratch in 3 steps:

Michael Spiegelman, VP of Global Product Innovation at Netflix, agreed with Sue and Jen, and added that whereas communication is usually described as a “soft” skill, it actually takes a lot to admit that you messed up, that you’re bad at something, that you were wrong, etc.

Pat Poels, SVP of Platform at Eventbrite, thinks that communication in startups is hard because product and engineering are working on pretty abstract things. He advises people to be aware of their communication. What’s the objective of the communication? Why did you decide to say what you’re going to say? Who is the audience? If you talk to the CEO or to a technical team, it’s important to phrase things differently and to have a different perspective too. Taking that time upfront to understand, identify the audience, and think about your objectives creates alignment and trust too.

On sharing perspectives, Michael showed the audience what the culture looks like at Netflix. The team talks about conceptually difficult, challenging products, and experienced how tech specs, requirements, and long documents were overrated. Instead of sharing with teams every detail about a project, he stresses on the importance of investing in everybody to have a shared context: same hypotheses, vision, what success looks like, what you need to achieve, etc. If trust is already built, he can believe in his teammates to work in autonomy and make decisions that will help the organization moving towards that shared goal. You trust people, so you can rely on them to get a positive outcome.

Tyler asked Michael what happens at Netflix when there is a big disagreement. Michael explained that a big part of the culture at Netflix is about candid feedback. When there is a layer of trust, feedback tends to be taken less personally: if I believe you are trying to help me be better at my job, I am more prone to listen to your feedback. These honest conversations can unblock situations. It’s just essential in such cases not to attribute thoughts to the other person and just show your own perception of what happened or why something happened.

When a project isn’t as successful as expected, Jen believes it’s crucial to have these feedback conversations. First remember what the hypothesis was and identify where the problem lies: process, people, or planning? Then, thinking about how to avoid it depending on capabilities.

Sue thinks feedback should be provided immediately, and in detail. This gives the person a chance to reflect. When receiving feedback, ask clarifying questions taking time to think through that conversation.

Giving feedback can also be scary, and Sue has a radical method to become better at it: she records herself giving feedback to see how she comes across when she does, and how to improve. But not too much though, because it’s always somewhat unpleasant to watch a recording of yourself, especially when you need to get better. The co-founder of Box said that perception is everything, and that it doesn’t matter what you mean, what matters is how it’s perceived.

Pat Poels thinks feedback also helps build stronger ties and trust, but it has to be timely. So during when you start working with someone, it’s important that you are open up to receiving feedback, and ask for it! That way, the day you will have to give feedback, people will listen as you did with them. Jen gave some precisions on what makes feedback successful: besides timeliness, being specific is key. 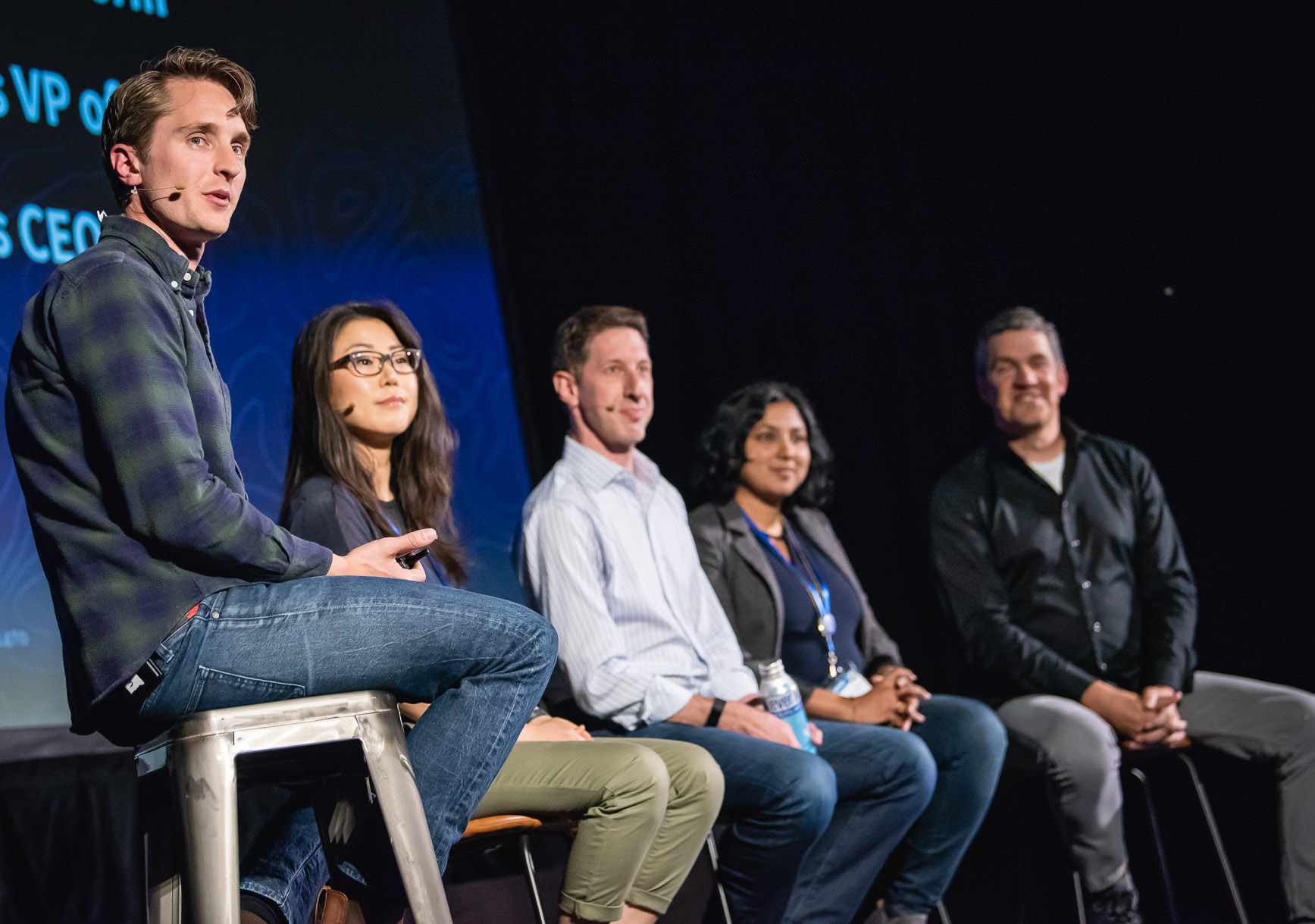 Tyler summed it up: you have built trust, shared perspectives, and had constructive debates. Now it's time to commit, but how?

According to Sue, it’s very important to get people aligned towards a common goal: having a forum where people come up with OKRs, offsites, making teams part of the process, making decisions their ideas. But trying to make decisions very consensus-based is hard. It never happens that everyone agrees. In the end someone has to make the call and explain it.

For Jen, sometimes people are spinning about stuff that isn’t that important. So before even debating a decision, its importance should be discussed and assessed by team members.

Michael shared his experience at Netflix, and how the company has Informed Captains to smooth out the process. Going from brainstorming to decision making, there can’t be a total consensus. Some people thus have the responsibility of determining what are team goals and make decisions. Informed captains are here to solicit opinions, get feedback and, in the end, make decisions.

If it’s the product leader, their realm of responsibilities is: strategy, hypotheses and the ultimate customer problem the company is trying to solve. When the Captain is an engineer, it will be more about tech decisions, architecture, etc. Once the decision is made, it’s everyone’s job to move forward according to it. And if it’s not clearly defined who the informed captain is, it’s the role of the management to decide.

Michael strongly believes that the worst decision is no decision. So as long as you choose and act, even if it’s not the right decision, you’ll be able to figure it out and fix it. Most decisions aren’t a commitment ahead of time anyway. Team members just have to understand who makes the call, who’s going to own it, and everyone is going to respect the decision.

Pat talked about his previous experience as a professional poker player. He played Poker during five years for a living, making hundreds to thousands of decisions each day. What he figured out is that whatever happens, it’s impossible to make them all correctly. Just keep on improving at making decisions, and do not be afraid. If you fail, just look back, learn, remember the outcome and fine tune.

Jen added that mistakes should be framed as bets: sometimes when the outcome is disappointing, it doesn’t mean the process is bad. At the end of the day, odds can be against you, even if you did everything right.

The audience could ask questions on Slido, and Tyler chose this one: what do you do when you empower someone to make a choice and you massively disagree with the choice they made?

Sue believe it’s part of the process. You have to trust people to fail and learn from their failures. It’s very intuitive for leaders to step in and solve the problem, but this would not help people thrive. Pat somewhat agreed, and somewhat disagreed too. According to him, it’s important to think about your own perception of the outcome of a decision you disagree with and act accordingly. If you equate it to walking with someone and seeing they’re going to trip and maybe skin their knee, you may not have to jump in and do anything about it, because the person can recover easily or even prevent tripping. But if that same person walks in front of a bus and you know it, you owe it to them to act. So, according to Pat, it really depends on the outcome for the business.

Jen acknowledged that there are two types of decisions: two way door decisions and one-way door decisions. If you can’t reverse the decision, it might be better to jump in and do something. Mike agreed, adding that managers should indeed be selective about their fights depending on the gravity of the decision that is about to be made.

Thanks a lot to Tyler, Jen, Sue, Michael and Pat for taking the time to share their insights on driving team performance with effective communication!